For hundreds of years, the Polaris star has been used as the reference point – the guiding star – for both astronomers and navigators.

It’s incredible to think how long humankind, through observation and experience, has been able to use the North Star’s light to travel all over earth.

And now, it’s your turn!

Once you learn how to find the Pole Star, you’ll be in a position to determine your travel direction – even in extremely dark nights.

Here’s how to find the North Star.

Here’s the step by step process below to make it easier and help you make sure you found the right one!

Where is the North Star Located?

Knowing about the North Star is different from locating it in the night sky.

Don’t wait until you are stuck in the wilderness without a compass to figure out where it’s at in the sky.

The North Star is not as conspicuous as some people may think – even though it’s among the brightest stars in the sky.

It’s located in the Ursa Minor constellation, also known as the Little Bear. the North Star is often referred to as the Stella Polaris.

Fun Fact: Does the North Star Ever Move? Yes!

Our North Star, hasn’t always been “The North Star.” In the times of the Egyptians 4,800 years ago, a star called “Thuban” located in the position Polaris is in now. Our North Pole actually moves and it travelled from Thuban to Polaris. In fact, it will eventually line up with earth’s new north star in 2000 years – gamma Cephei!

What’s the Process of Finding the North Star?

To find the North Star in the night sky, you first need to search for the Big Dipper.

Fun Fact: The dippers are not actual constellations. They’re groups of stars known as asterisms and are located inside the constellation. The Big Dipper is among the most well known collection of stars in the northern sky.

Differentiating it from the rest is easy to do. The Big Dipper is situated north of the celestial pole. Understanding how to find the Big Dipper is critical in finding the North Star.

The second critical factor to finding Polaris is the Little Dipper, also known as Ursa Minor. This is smaller and locating it in the night sky can be a little more difficult.

Steps to Finding the North Star 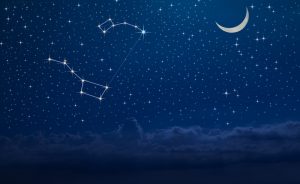 Using Polaris as a Guiding Star

Depending on your latitude, where you spot Polaris will be your northern sky.

Remember, the North Star is more accurate than a compass. A compass can be limited by recurrent differences and is only capable of displaying the direction of the lines where there’s a robust magnetic force in a particular location at a particular time.

Note that Polaris too isn’t precisely positioned due north and about 0.7 degrees separate the North Star from the center directly to the north.

Physical Facts of the North Star

Polaris is 434 light-years away from us , is almost 4,000 times brighter than the sun, and gleams at 2nd magnitude. Polaris is a Cepheid variable and a fluctuating star that seems to slightly differ in brightness across a time frame of less than four days.

Aiming a small telescope on Polaris, you can easily notice a small associate, also known as Polaris B gleaming with a faint bluish tint at 9th magnitude. Sir William Herschel was the first person to spot the associate in the year 1780. Astronomers are certain that Polaris A and B are separated by approximately 2,400 astronomical units.

What is the North Star Called?

Called Polaris, learning how to find this star is among the most crucial survival skills. If you live in the northern hemisphere, then Polaris, the North Star, comes in handy to help tell you your direction without using a compass.

Knowing how to identify Polaris, the North Star, during clear nights from the earth’s surface is critical. If you know how to do this already, you’re probably familiar with the process. Knowing how to locate it in the ancient years was key to navigating long distances in the water or wilderness.

The good thing about using Polaris for navigation is that it always points true north – which isn’t the case with a magnetic compass.

This makes finding north easier. Also, you won’t have to struggle with magnetic declination since the earth’s northern axis points directly towards the star.

This means that, as you watch the star, you’ll be facing towards true north because it perfectly aligns itself with the celestial sphere.

By knowing how to find the North Star, travelers can establish all the compass points. In this case, eastward would lie to the right, westward would be on the left, and while southward would be at the back.

Is the North Star the Brightest?

Polaris is the brightest star in the Ursa Minor constellation. Polaris is critical because the Earth’s axis points nearly directly towards it.

Polaris doesn’t rise or set during the night but almost remains at the same location over the northern horizon all year round. The rest of the stars rotate around it and finding it is possible at any time of the night, all year round. The North Star location is in the Northern Hemisphere and you can easily find it in a proper northerly direction.

Assuming you wanted to locate the North Star from the North Pole, it would be directly up above. If you’re like many survivalists, you’re probably wondering: does the North Star change? Polaris appears to be stationary in the sky. This is because it’s positioned close to the Earth’s axis extended into space. The North Star is the only star that doesn’t change position in the sky.

Knowing how to find the North Star prepares you to find your location if you ever get lost in the wilderness. Don’t wait until this happens. Read this guide as a way to improve your astronomy skills.