Expert: Neil Eneix
May 20th
Sign In/Sign Up
KITS
GEAR
FOOD
SHOP ALL
ABOUT US
LEARN
Spread the love

Plants are beautiful and if you’re a plant lover, chances are high that you’ve got one or more house plants. But did you know that several common house plants can be poisonous?

Let’s discuss some of the most poisonous plants to be aware of when it comes to child safety or wilderness survival.

Which plants are poisonous to humans?

Here is a list of common and uncommon poisonous plants you should look out for. We also include what parts of the plants you need to be aware of specifically.

Some parts of the plant may only cause skin rashes, while others may cause vomiting or even death from toxic leaves, seeds, or berries.

It’s important to know what to look for in case you have to call poison control. We’ve included photos below to make each one easier to identify.

This is one of the most poisonous plants in North America. The Water hemlock plant falls in the carrot family and looks like the Queen Anne’s lace (Daucus carota.) plant While it’s often mistaken with edible celery or parsnips, this plant contains poisonous cicutoxin in its toxic roots.

Eating the wrong parts of the plant with water hemlock can cause abdominal cramps, vomiting diarrhea, painful convulsions, nausea, and may cause death in extreme cases.

Survivors may have to live with lasting tremors and amnesia.  Call 911 or poison control immediately if you think an animal or human has eaten it. 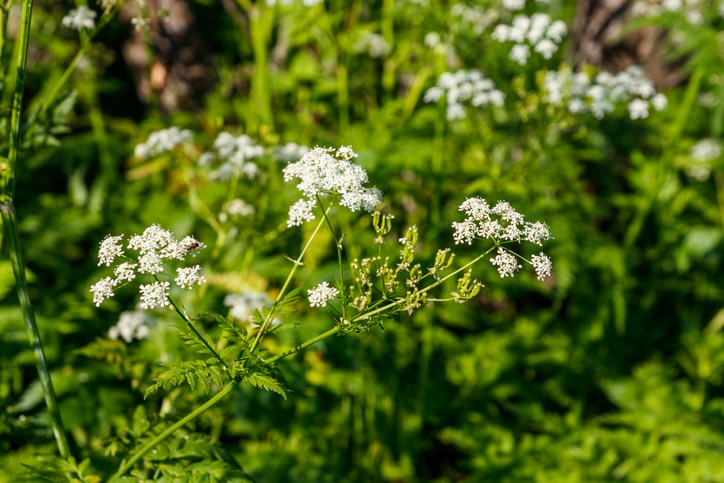 If you aren’t familiar with the differences, Poison Hemlock’s leaves, and even other parts, can look similar to popular plants used for food – like Queen Anne’s lace, yarrow, wild fennel, and elderflower.

Even though it may not be as deadly as Water Hemlock, Poison Hemlock is common in many areas, and still dangerous.

ALL parts of the plant (seeds, flowers, leaves, berries) are poison and contain alkaloids that are toxic for your nervous system, small doses of the poison may upset your system and even cause vomiting, diarrhea, and death from respiratory collapse if eaten.

Note: Poison Hemlock has nothing to do with the Hemlock Tree species which is edible. 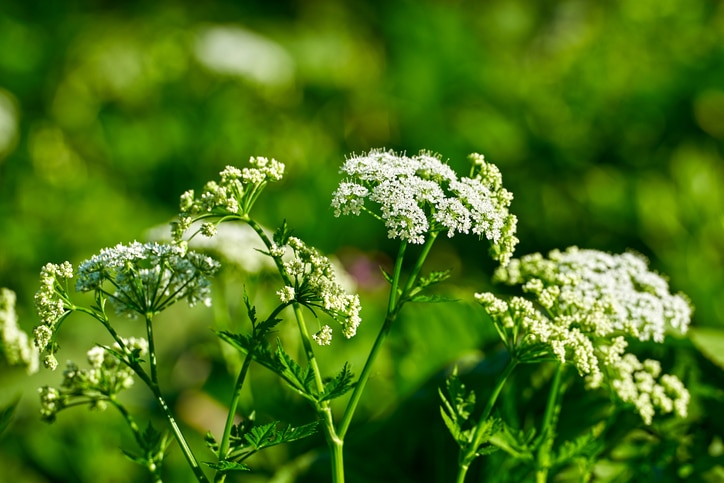 Also known as thunderwood, Poison sumac  is a common, woody shrub usually found in wet areas like swamps and forests with hardwood or pinewood.

Technically Poison Sumac isn’t poisonous, but contact with the leaves on skin can cause an itching , burning reaction because of an oil called urushiol. Poison sumac is more toxic for skin contact than poison ivy and poison oak. 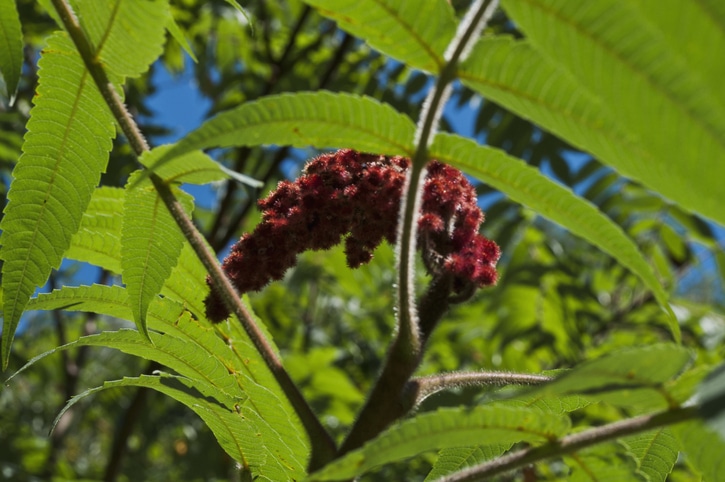 Poison Oak is also a common, woody shrub that can be found in Western North America. It also grows in wet, marshy areas like swamps or in forrests. Skin contact with the leaves and even other parts of Poison Oak can cause rashes that itch and blister. 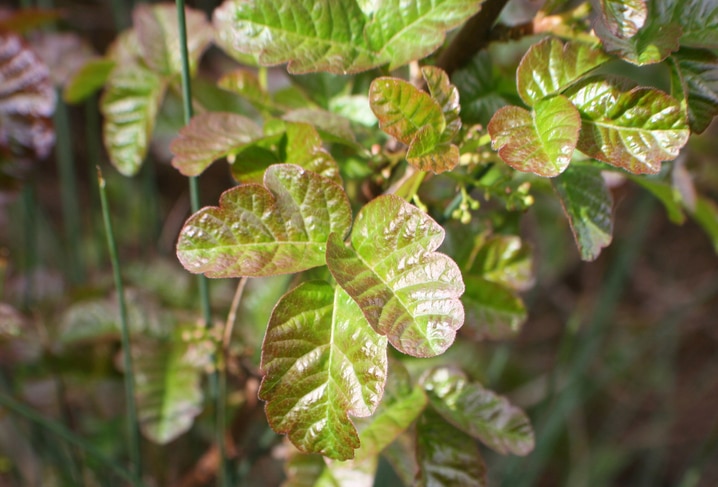 Poison ivy is a common, flowering plant commonly found in Asian and Eastern North America. The urushiol oil resin in poison ivy can be found on the roots, leaves, and even stem parts of the plant.

It’s very sticky and can even attach to parts of your clothing. Skin contact with with leaves of a Poison Ivy plant will cause a blistering, uncomfortable rash.

You can learn more about the differences here. 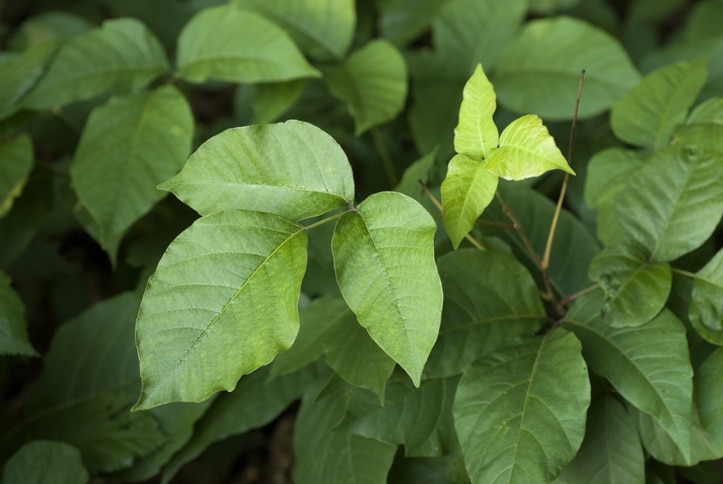 Eating toxic seeds orally from the plant may cause issues with the GI system including vomiting diarrhea, but rarely causes death. The plant is slender, perennial climber, and has long, pinnate-leafleted leaves and red seeds. 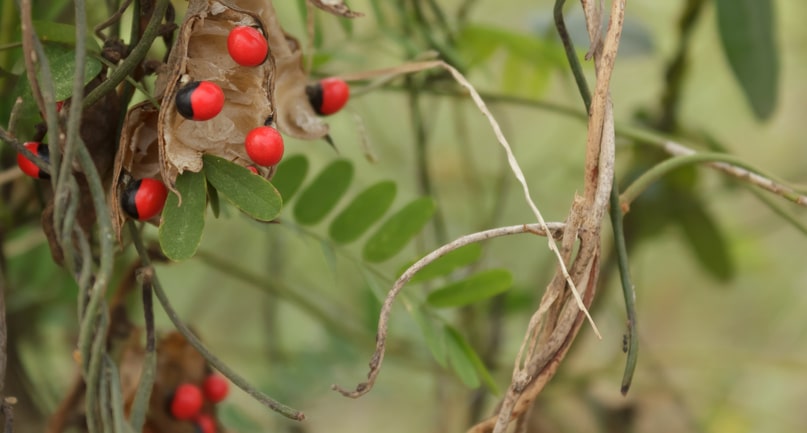 This poisonous plant bears attractive and sweet berries. Deadly Nightshade can lure both children and adults into eating them.

The plant is a native of waste or wooded areas in the south and central Eurasia. It has poisonous leaves and its berries are black, shiny, and the size of cherries.

Apart from its poisonous leaves and berries, deadly nightshade also contains scopolamine and atropine in its roots and stem. Consuming this plant can cause involuntary muscle paralysis. Getting into contact with the plant leaves may cause severe skin irritation. 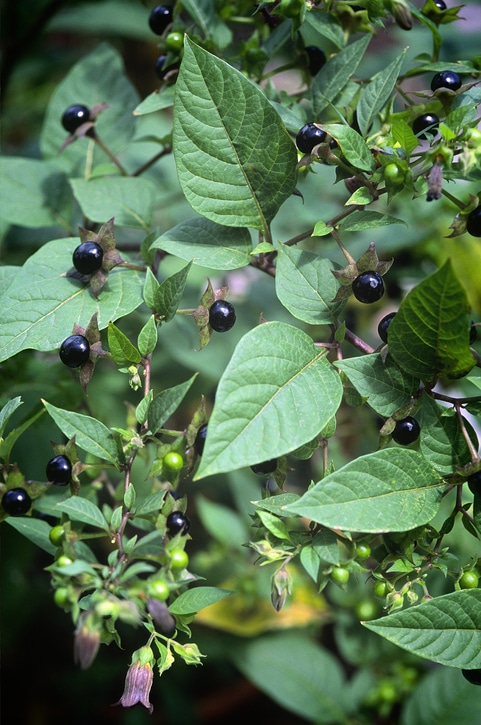 This poison plant is highly toxic – especially for children. It has bright-colored berries that attract both animals and humans.

Bittersweet nightshade is often mistaken with Oriental bittersweet and American bittersweet plants which explains why many homeowners are unable to identify the plant. 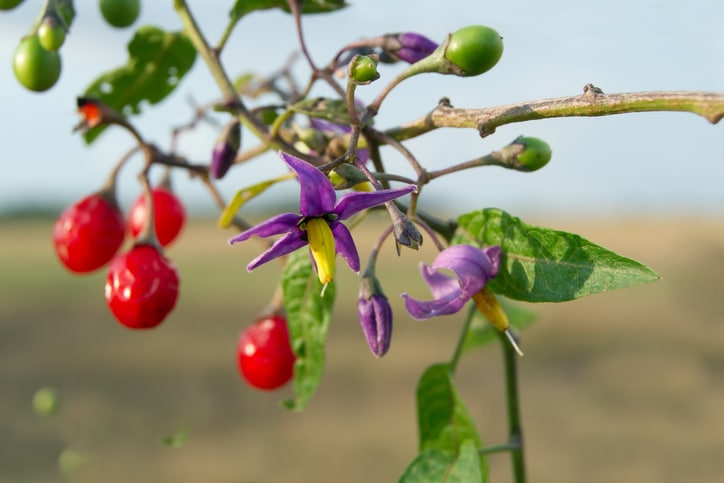 It’s known as the root that caused Nancy Hanks’ (Abraham Lincoln’s mother) death. White snakeroot or Ageratina altissima is one of the poisonous herbs in North America. It has flat-topped bundles of tiny white flowers and contains a deadly alcohol referred to as trematol.

Some people have died from ingesting toxic plants or leaves directly. However, Nancy Hanks death was from consuming milk from a cow that had fed on the plant. White snakeroot is so poisonous that the milk and meat from poisoned domestic animals or pets can pass poison to humans.

Symptoms vary from one person to the other and can include nausea, reduced appetite, digestive discomfort, vomiting, and body weakness. Some people experience abnormal blood acidity, an overly red tongue, or death in extreme cases.

Today, farmers understand the large toxicity of the vines and are quick to remove them from animal feed. 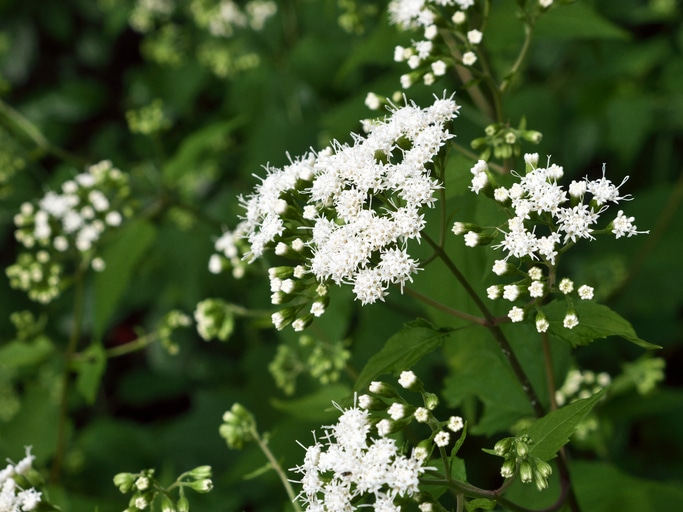 Chinese lanterns are related to bittersweet nightshade. It’s often grown by craft lovers and comes with green pod husks that become yellow during summer and rich orange by fall. The Chinese lanterns’ bright pods are used in dried wreaths and floral arrangements.

Any part of the plant, including the leaves and stems, are harmful and symptoms can include numbness, low temperature, headaches, breathing issues, stomach aches, vomiting and diarrhea, and dilated pupils. 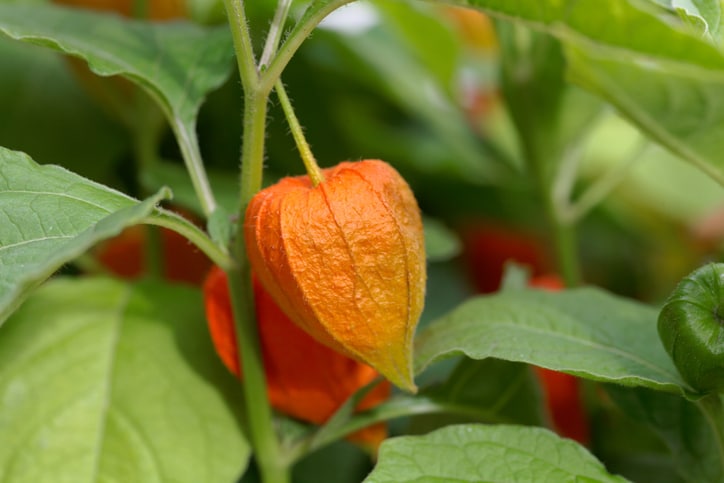 The castor bean is a charming plant often grown for ornamental purposes because of its flower, leaves, and foliage. The refined seeds of the castor bean plant produce castor oil. However, they contain ricin, a poison that makes them deadly in small amounts.

Even though castor oil is so beneficial, all it takes to kill a child or an adult is one and eight seeds respectively. Ricin restricts the combination of proteins in body cells and can cause severe diarrhea, vomiting, seizures, or even be fatal, resulting in death. Death caused by poisonous things often occurs from accidental ingestion.

Castor oil is refined to be safe for use, though, so you don’t need worry about ricin when using it as a treatment. 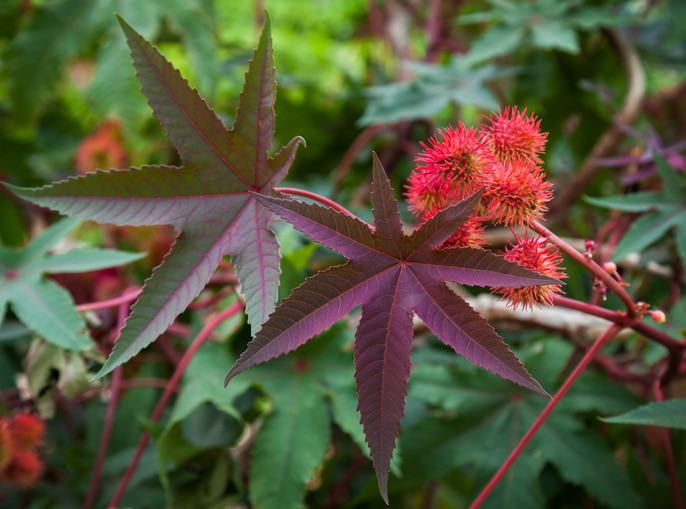 Except for Bay Laurel, every other type of hedge is toxic and produces hydrocyanic acid which is harmful for animals and humans. Symptoms can include difficulty breathing, convulsions and difficulty walking or standing.

What flowers can kill you?

Flowers are usually bright and beautiful but can also be poisonous. Knowing how to identify flowers like the Nerium Oleander or the bleeding heart helps you tell the difference between dangerous flowers and safe flowers.

If you or someone else is experiencing the symptoms listed below, make sure and call 911 or poison control.

Here is a list of poisonous flowers and the parts (like berries, leaves, or seeds) you should beware of.

Oleander is one of the most poisonous wild flowers. Oleander is also known as the sweetly scented killer. You’ll notice that Oleander blossoms are magenta, crimson, or creamy white.

Cases of accidental poisoning from Oleander have been reported from campers who burn oleander branches to roast marshmallows and hotdogs.

Lily of the Valley

It’s important to understand that the water you use to put cut lily-of-the-valley flowers may contain traces of convallatoxin. This substance can increase heart contractions.

These are tiny white wildflowers that are attractive but deadly. Poison in the water hemlock has a carrot scent but it can damage your central nervous system within a short time.

The effects of water hemlock poison include convulsions and seizures that can be severe due to cardiovascular collapse and asphyxia (both of which can cause death).

Let not the name of this plant fool you. This is one of the poisonous trees that bear trumpet-shaped colorful hanging blooms. While this plant can be an eye-catching patio tree it contains atropine and scopolamine both of which are poisons and hallucinogens.

This whole plant is extremely poisonous but its highest toxin concentration is in the seeds. Exposure to these toxins may result in a coma, hallucinations, and delirium.

What kind of mushrooms can kill you?

This is the recognizable toadstool in children’s fairy tales. You can easily identify it from its white spots and bright red cap. This fungus is poisonous to both animals and humans.

The main poisonous agents in Fly Agaric are ibotenic and muscimol acid. These toxins affect the central nervous system and cause nausea, loss of coordination, lack of sleep, and hallucinations. The effects start showing approximately one hour after consumption but they’re hardly deadly.

This type of mushroom is found across the Northern Hemisphere and derives its name from its appearance and deadly features.

Angel Wing was once edible but this changed when almost 60 people got sick after consuming them in Japan. 17 out of these people died. An old man would later die in 2009 after consuming angel wings mushrooms.

A big percentage of the people who died, however, had pre-existing liver or kidney complications. While the mode of poisoning is yet to be understood scientists believe it contains high levels of cyanide.

This is a tiny, delicious looking mushroom that belongs to the Lepiota family. It contains amatoxin, a poisonous substance that can damage the liver.

This toxin is associated with up to 90% of all mushroom poison-related deaths. Symptoms of exposure to this toxin include gastrointestinal-intestinal pain. Deadly Dapperling grows in conifer forests across North America and Europe.

Can poisonous plants kill you?

Yes. Some of the most poisonous plants can kill you instantly. However, some have severe effects but aren’t deadly.  It’s important to call poison control immediately if you aren’t sure.

What common shrubs and plants are poisonous to dogs?

Some of these plants grow in backyards and can be mildly toxic or severely poisonous. These include Bleeding hearts (Dicentra spectabilis), Yarrow (Achillea millefolium), and Dogbane (Apocynum cannabinum).

The leaves of agave Americana poison plants resemble those of aloe vera. However, this plant doesn’t belong to the cacti plant family.

Which plants are poisonous to cats?

Some plants that are toxic to cats cause skin, stomach, and mouth inflammation. Some of these poison plants can cause normal functioning of a cat’s organs to alter – such as the heart and kidney.

Researching pictures of poison plants can help you identify what’s toxic with ease. This guide to poisonous plants and flowers should help you stay safe – especially in outdoor emergencies.

If you aren’t sure that a a specific plant or parts of the plant (leaves, berries, seeds, flowers) may be toxic and cause skin issues or worse, vomiting or death, make sure to call poison control and be prepared to describe the plant in detail. Look for distinguishing characteristics to help them identify the plant.